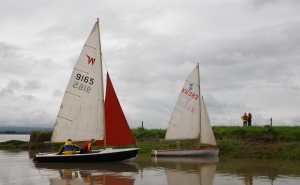 A dull and dreary Sunday morning saw Andy Simons and myself wondering if the race would go ahead. Then along came Angus and Steve to man the safety boat and Al Jack and Gaz in the 420 to give us a race.

A torrential downpour slowed things up a bit and when we eventually launched the boats, the wind died…………! ‘only in Lydney’! Therefore a drift up stream ensued using what apparent wind we could with Roo leading the 420.

The safety boat came alongside for a discussion regarding the likelyhood of making Bullo before the tide changed and changing to Brims Pill instead. This we all agreed was the best course.

Due to lack of knowledge of where the entrance to the Pill was some back and forth ferry gliding meant that the 420 arrived in front of Roo. Because the reeds were so wet and the 420 had no sausages, we decided to take a tour up the Pill as far as we could get then sail back again.

This proved to be difficult with flukey winds and tide but we both managed to get as far as was safely possible before turning back.

Leaving the Pill, the tide had turned and the wind sprang up…….typical! But it did mean we had a decent sail back with Roo the clear winner.

The 420 managed a pretty decent Ferry Glide onto the slip despite the wind dropping.

All in all, a pleasant and interesting sail only marred by the lack of other club members. Sausages were duly cooked and eaten along with some good beer.

Many thanks to Angus and Steve who made the task of safety boat look really easy despite getting a drenching in the rain shower. I hadn’t realised just how easy it is to get the safety boat off and on the trailer. It usually seems to take the combined effort of about 6 opposite opinions, lots of winching and some blue language to get it sorted!

Former Club Commodore
View all posts by Eric Witheridge →
This entry was posted in Uncategorized. Bookmark the permalink.